Can Smoking Age You Quicker? Studies Show Everything 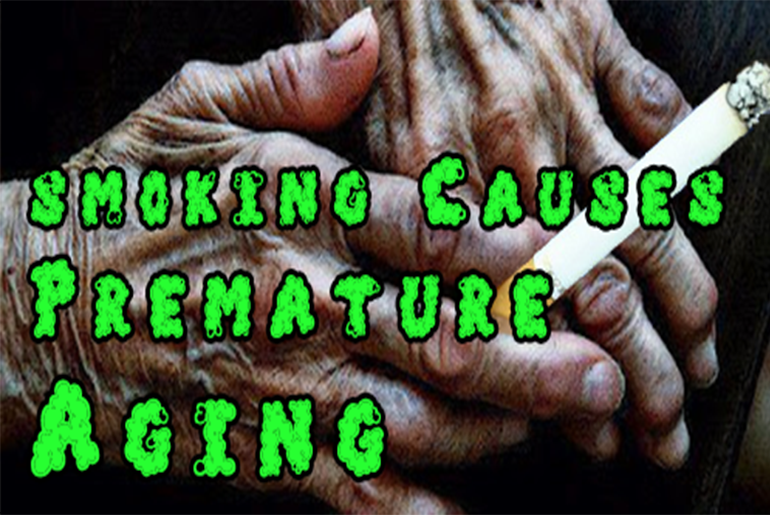 Did you know smoking causes premature aging and turns your hair GRAY… among other things?

That’s a little-known fact, and I am living proof! I started noticing I was turning gray in my late thirties, early forties, and I didn’t like it. So I began touching up the roots… first going to a hair salon to have it done, and when that became too costly, I started doing it myself at home.

It was getting to the point where every three weeks or so I had to repeat this process… it was a pain in the butt (pun intended) but something I didn’t want to neglect. Now here it is twenty years later, and I’m still dying my hair, only not as often, and I couldn’t be more thrilled!

Ever since I quit smoking and switched to electronic cigarettes, things have changed in a big way and all for the good I might add. It’s one of the many reasons, benefits, perks if you will to quitting cigarette smoking, where your whole body metabolism slows down and returns to a normal pace, including your heart rate.

No wonder smoking knocks approximately twelve years off your life when you smoke your body is functioning at record speeds, going against all grains. Do yourself a huge favor and quit that dirty, nasty habit now and be able to reap ALL the rewards!

“In varying age, genders, smokers, and non-smokers). Their aim was to determine if there is a significant link between premature hair graying and cigarette smoking. In conclusion, the study showed a significant relation between both.”

Turning gray can happen at any age, young or old, or not at all. Take, for instance, my grandmother, rest her soul, she passed away at a ripe old age having only a few gray hairs. So few, that I could count them on her head, and she never smoked a day in her life.

On the other hand, my mother was like me, a smoker and premature gray’s surfacing early on. It can be in the genes, to begin with, but by smoking, you’re only intensifying and speeding up the process. The causes for hair color to change are the rate of production of the pigment called melanin (view more information here), same happens to your skin when out in the sun too long.

Let’s not forget the wrinkles and dry skin associated with tobacco that can become quite apparent. Especially around the eyes and mouth areas, the discoloration of skin tone (a gray hue I call it), the overall puffiness, dryness and cracking of the skin. It becomes a bigger and bigger uphill battle to fight as time goes.

The “Real” Physical Factors That Result From Smoking

Lungs: Smoking scars the lung tissue caused by the continuous inflammation in the small airways. Leading to the tightening of the chest making it difficult to breathe and accommodated by a chronic cough. Smoking also destroys the “alveoli” which are tiny air sacs allowing the lungs to receive oxygen.

Because the alveoli are permanently killed, so are a part of your lungs, if enough of them gets destroyed, then Emphysema sets in which results in significant shortness of breath.

Heart: It thickens the blood and causes clots making it harder on your heart to pump through all parts of your organs. Leading to stroke or heart attack. It also affects your blood pressure; smoking raises it causing stress on the heart. Continuing with the carbon monoxide that’s being inhaled contributes to the lack of oxygen causing the heart more stress. Ultimately this leads to heart disease.

Face: When smoking the skin loses its elasticity, and the pigment goes to a grayish complexion. The dryness causes early wrinkling and loses its vibrancy appearing pale. Apparently making you look aged which can begin as early as your twenties.

How about the tired out feeling you get after climbing just a flight of stairs, etc.

When heavy smoking, you feel like your heart is going to jump out of your chest. Cigarette smoking is an ongoing cross to bear that gets you nowhere except looking for alternate ways to slow down the aging process and ways to feel better when the answer is staring you in the face.

Another ugly sign you are a smoker the yellow tint you get on your teeth and fingers, a shade that doesn’t wash away easily, it’s almost like a permanent slime. I have also noticed since I quit, my teeth are a lot whiter and brighter, and I lost all the yellow discoloration around my fingers.

Even my fingernails are healthier looking now. And did I mention how much younger I feel? Oh well, that’s an understatement for sure, I feel simply marvelous, and I don’t remember ever feeling this good, it’s been that long!

The tar and thousands upon thousands of additives and chemicals

This is what has been added to cigarettes these days and are the real reason your damaging your body. Not only can signs be seen from the outside but your insides are taking a major hit as well. All your organs get affected, starts from the inside and works its way to the outside.